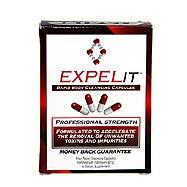 The Expelit capsules combine the efficacy of Riboflavin and Creatine that can remove the toxiс substances in your organism without problems. You can withdrawing them when urinating. Detoxify your bladder with Zydot's Expelit Quick Flush Capsules, which should be taken in the course of one day. Apply them on the day of the drug test to cleanse your urine.
The capsules start acting within the shortest timeframe. You need just 2 hours and the result is guaranteed. You should look after the allowed level of toxic elements and get rid of substances that contaminate your organism. Remove the signs of drugs such as THC, marijuana, cocaine, traces of alcohol or nicotine. All undesirable substances are easily flushed with this product. You should urinate several times to reduce the amount of contaminants that still remained in you. Do it repeatedly to withdraw toxins. You can achieve excellent results that are preserved for 5 hours.
Be careful! The results obtained thanks to Zydot's Expelit Quick Flush Capsules do not remain for a long time. The product should be taken just before the drug test.

How to use it: